STAY BACK behind dangerous lorries 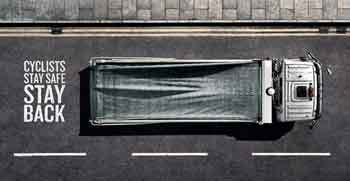 A short, sharp message from Transport for London headlines their latest PR campaign warning about the danger of HGV lorries.

Thousands of handlebar leaflets are being put on bikes all over London and there will be posters re-enforcing the message.

The posters give a very quick warning to all cyclists. Beware of all lorries, staying behind is the safest option.

Being hit by a large lorry is thankfully rare but always serious and more likely to be fatal than any other crash. If there is a junction nearby, don’t try to overtake as lorries turn quickly, cutting across your path.

Cycle sensibly and assertively to help yourself stay safe, especially at traffic lights and junctions.

TfL links to London Cycling Campaign’s advice for staying out of the lorry risk zone. 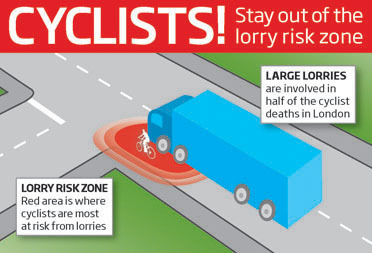 They also link to our Safer Cycling Code and the See Me, Save Me campaign for reducing lorry danger.

Transport for London is keen to point out that it is also targeting lorry drivers. – The HK Government does not even target car drivers, but it would be a great and necessary step for them to also target lorry drivers.

There are press campaigns in the truckers’ magazines, as well as a webpage for drivers.

They will be putting on information events at channel ports and lorry service areas, aimed at drivers heading for London. – This kind of informational event is perfectly possible on Hong Kong also, around the container ports and at the road crossings from mainland china.